LONDON – SEPTEMBER 22, 2022 – A new report from Cut Carbon Not Forests (CCNF) shows that the UK Government’s plans for Bioenergy with Carbon Capture and Storage (BECCS) – on which it is currently consulting – could undermine the country’s food security. The Government’s official climate change advisors believe BECCS will be needed to offset 35.4 million tonnes of carbon dioxide in 2050 from other parts of the economy – like aviation and industry.

Currently, most bioenergy uses imported wood from forests overseas. This has significant negative impacts on nature and the climate. But the Climate Change Committee and the Government have signalled that they may replace these imports with energy crops grown on UK farms. While existing biomass plants can only burn wood, new ones could be built to burn energy crops. 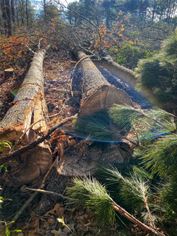 Growing enough energy crops to make this idea work would require around 1.3 million hectares of UK land every year that is needed for food production. If that land were instead used to grow wheat, it could make 15 billion loaves of bread, or enough calories to feed 4 million people for a year.

In addition to putting the UK’s food production at risk, it would also threaten nature, worsen our climate, and undermine energy security. For these reasons, the CCNF coalition urges the Government not to support any Bioenergy with Carbon Capture and Storage.

“While the Government and industry desperately want to rely on BECCS to meet net zero goals, it doesn’t make sense from any angle,” said Elly Pepper, campaigner at the Natural Resources Defense Council (NRDC) and the Cut Carbon Not Forests coalition. “The fact that the Government’s BECCS plan could mean the loss of huge swathes of land needed to grow food for UK families is unconscionable.”

“The one and only reason the UK government continues to pursue this ill-advised path is its cosy relationship with Drax – the UK’s top polluter and largest bioenergy generator. Indeed, the Government’s current plans for BECCS reads like Drax’s wish list and would hand the company billions in subsidies, whether it successfully captures carbon or not. In the midst of a climate and biodiversity crisis and record food price inflation, the government must find real solutions to prevent global warming – not perpetuate the corporate capture that got us into this mess in the first place.”

“Promising energy companies more bill payers’ or public money if they install BECCS makes no sense for the climate, for energy security, nor for food security,” said Almuth Ernsting from Biofuelwatch. “This proposal is first and foremost about handing Drax more money to continue burning millions of tonnes of imported wood pellets even less efficiently than they are doing now, with devastating impacts on forests and the wildlife and communities that depend on them, as well as on the climate. Potentially, the BEIS proposal could also cause energy companies to burn crops at the expense of UK food security and UK biodiversity.”

“We need urgent actions to address the climate emergency in tandem with fuel poverty and the worsening cost of living crisis. These must include large-scale support for home insulation and other energy efficiency and conservation measures as well as for low-carbon renewable energy and heat pumps – not handing ever more funds to companies for burning wood as well as fossil fuels.”

Almost half of customer service calls fail due...

Helping business where it matters most

Vectra Selects the Nuvias Group as Only Strategic...